In 1978 when I heard Pam Pam drumming in the halls of Edison high school in Stockton, I had to find out what was behind it. It was then that I was introduced to the Polynesian culture. From that day on I’ve been hooked. I joined Lehuanani’s Polynesian dance group under the direction of Frank and Marilyn Salgado. This is where I learned my love for Tahitan dancing. After Frank and Marilyn moved, I still wanted to learn more about the Polynesian culture. That’s when I joined Te Poe O Patitifa, under the direction on Ioane Joel Burns. I was given the opportunity to visit Tahiti to learn more about the culture and to meet the Tahitian People who we now call Family. Auntie Betty Who passed away in 2005, helped me form a bond that will never be broken. This has also given me the opportunity to train under Poema Poihipapa and Heiti from Papeete as well as Kohai the lead dancer from Tamariki Poerani.

Marcus started dancing in 1997 for Te Poe O Patitifa under the direction of Ioane Joel Burns. In 2004 Marcus became interested in drumming. He began with the Fa’akete and then moved onto Tari Parau then to the Toere. He then taught himself to play the Ukelele. When Tamari`i Matairea was formed in 2006 Marcus became the lead drummer and lead musician and Tane Choreographer. 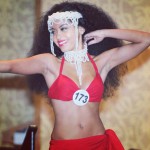 Melanie has been dancing since the age of 2, she began with Te Poe O Patitifa Under the direction of Joel Ioane Burns. She has competed in many Tahitian dance Competitions in cities including Merced, San Jose, Fullerton, Reno, and Las Vegas. She has also had the opportunity to dance in Tahiti, where she placed first in the Ori Tahiti Nui World Championships 2015! Melanie’s Facebook page is here.

Our little “angels” the Grandbabies!